Press enter to begin your search

What is Down Syndrome?

Down syndrome is usually identified at birth or shortly thereafter. Initially the diagnosis is based on physical characteristics that are commonly seen in babies with Down syndrome. These include low muscle tone, a single crease across the palm of the hand, a slightly flattened facial profile and an upward slant to the eyes. The diagnosis must be confirmed by a chromosome study (karyotype). A karyotype provides a visual display of the chromosomes grouped by their size, number and shape. Chromosomes may be studied by examining blood or tissue cells.

Down syndrome is usually caused by an error in cell division called nondisjunction. It is not known why this occurs. However, it is known that the error occurs at conception and is not related to anything the mother did during pregnancy. It has been known for some time that the incidence of Down syndrome increases with advancing maternal age. However, 80% of children with Down syndrome are born to women under 35 years of age.

Types of Down Syndrome

There are three chromosomal patterns that result in Down syndrome: 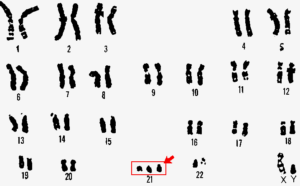 Regardless of the type of Down syndrome a person may have, a critical portion of the 21st chromosome is present in some or all of their cells.  This additional genetic material alters the course of development and causes the characteristics associated with the syndrome.